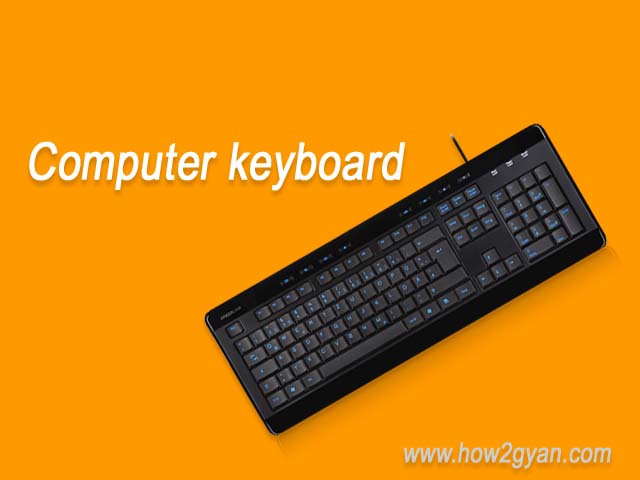 Keyboards come in many different styles that various models, differ in size, shape, and feel, except for some special-purpose keys. Most of the keyboards build-out almost identically with some features. The keyboard has about a total of 104 keys arranged in six groups

The alphanumeric keys are located at the area of the keyboard that looks like typewriter keys, these keys are arranged the same way on almost every keyboard. Sometimes this common arrangement is also called QWERT (pronounced as KWER-tee) layout because the first six keys on the top of letters are Q, W, E, R, T, and Y.
The alphanumeric key group includes four keys having specific functions, the Tab, Caps lock, Backspace, and Enter key.

The Shift, Alt (Alternate), and Ctrl (Control) keys are known as modifier keys because they modify the input of the other keys. If you hold down one of a modifier key while pressing another key, then you are changing the second key’s input in some way.
For example, if you press the A key, you input a small a. But if you hold down the Shift key while pressing the A key then you input a capital A.
The modifier keys are very useful because they give other keys multiple functions capability.

The function keys are located usually at the top of the keyboard, which contains 12 keys labeled as F1 to F12. The function key allows you to input commands without typing long strings of characters or navigating menus or dialog boxes.
Each function key’s purpose depends on the program you are using. For example, in most of the programs, F1 is the help key. When you press F1 it will open a window to display information about the program.

How to Crop Image in MS Paint

How to Write Assamese Yuktakshar?

How to insert Math equations in LibreOffice